Every time you use a noun, rules exist for whether it should be singular or plural AND if it needs an article (the, a, an). Pronouns are types of nouns but never take articles. Complicating the issue is the fact that some nouns are countable and some are not countable. Following the question and flowchart below, you can determine which article to use (if any). Note that the symbol Ø is used to mean “null” or no article. 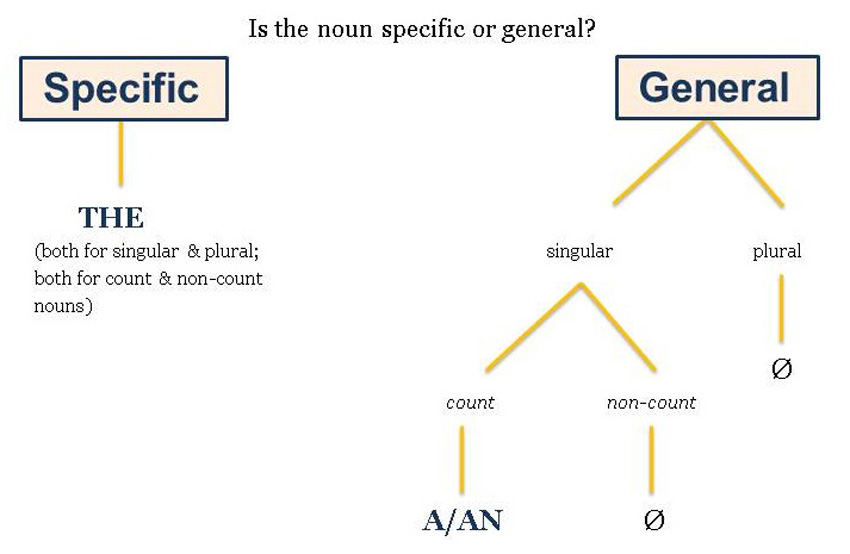 Click each topic below to learn more about using articles

What It Means to Be a Specific Noun

Both the writer and reader recognize that the noun has a specific reference (is unique). The necessary information to identify the noun’s reference can come from the text itself, context, or general knowledge. You can test this by asking yourself: which [noun]? If the question is illogical, then use the.

Previous mentions in the text can make a noun specific.

Adjectives can make a noun one-of-a-kind.

Use the if the noun is part of an of-prepositional phrase that shows quantity. Possessives (my, your, his, her, its, our, their) function similarly to the.

What It Means to Be a General Noun

Neither the writer nor the reader identify the noun as something known, unique, or familiar OR the noun’s reference is non-specific (general). You can test this by asking yourself: which [noun]? If the question is logical, then use a/an.

A general noun indicates membership in a group.

A general noun is used as a definition.

What It Means to Be a Count(able) Noun

You can count the noun. The noun has a singular and plural form (perhaps irregular).

Some countable nouns occur only in their plural form.

What It Means to Be a Non-count (Uncountable) Noun

You can’t count the noun.

These nouns often are in the following categories:

Some Nouns Can Be Either Countable or Uncountable

If you're not sure, check a dictionary to see which meaning yours resembles.

What to Do with Proper Nouns

Generally, no article (Ø) is used before singular names of countries, continents, states, lakes, parks, individual mountains, cities, streets, universities, and months/days of the week. It is not always clear, so you can check online to see if the is a part of the official name.

UNLESS the proper noun includes an of-phrase.

The is used with oceans, rivers, deserts, bridges, geographic areas, public buildings, and periods/events in history.

The is used for plural names of lakes, mountain ranges, nationalities, countries, and countries that include the words United, Union, or Republic of.

Other Options That Function as Articles (Determiners)

This chart categorizes determiners based on whether the noun is (1) specific or general, (2) singular or plural, and (3) count or non-count: 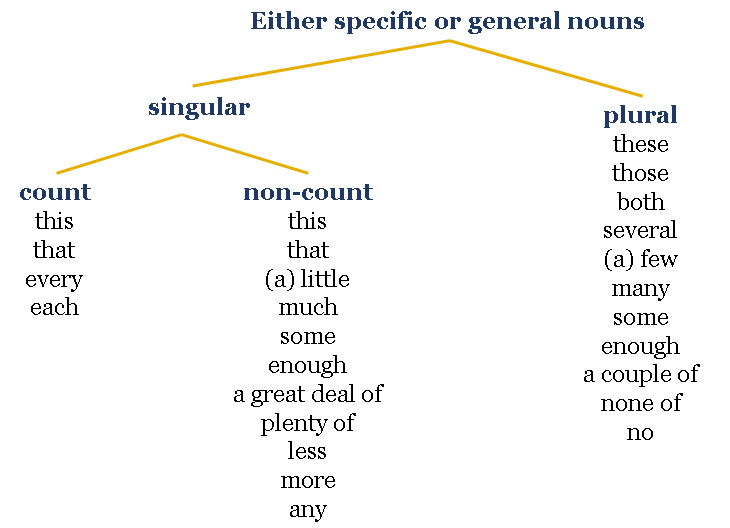